This week has marked several important changes that may affect your practice. Click the links below to learn more.

We have received further information regarding the 3% Medicaid rate cut as it applies retroactively to payments for dates of service going back to 1/1/2014.

In 2013, the NC General Assembly included a 3% “withhold” for all Medicaid services. After difficulty developing the program, the “withhold” was redrafted as a cut with an effective date of January 1, 2014. Due to delays in NCTracks programming, the 3% cut was implemented on March 2nd. At the time of the implementation, Medicaid’s plans for recoupment of 3% of payments for dates of service 1/1/2014 – 3/1/2015 were still being finalized.

On Tuesday evening, 4/14/2015, Medicaid announced planned recoupment dates. Claims will be reprocessed beginning next week, 4/20/2015, and recoupments of 3% of the previously paid amounts will be seen in checks beginning 4/28/15 through 6/23/15. See the official announcement and more info, including frequently asked questions, on the DMA website.

How does this affect my practice?

How do “recoups” work?

Reprocessing occurs in the same order as claims were originally received. Any or all checkwrites 4/28/2015 through 6/23/2015 may be affected.

What are next steps?

See the announcement from the North Carolina Medical Society below: 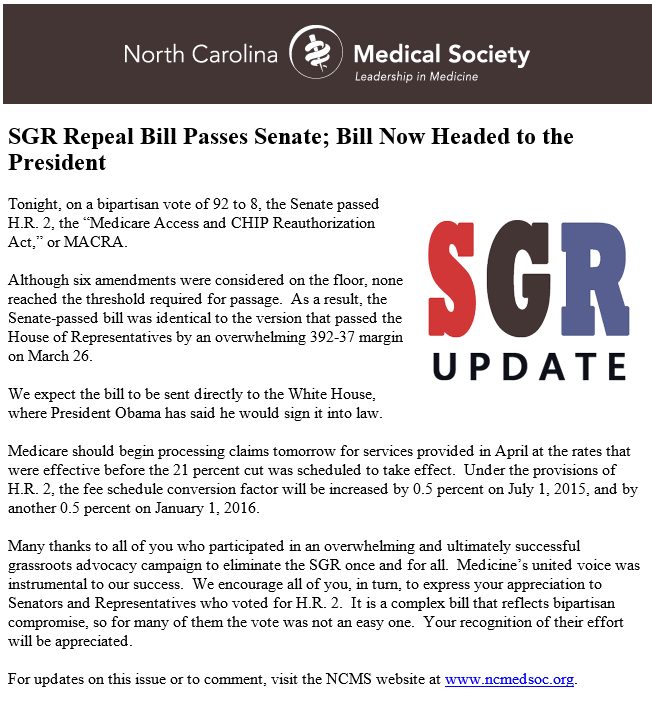 Why is this important?
The SGR was used in the calculations to determine the Medicare Physician fee schedule, and it was set to reduce your Medicare Part B rates by 21% on service dates starting 4/1/15. With its repeal, that cut has been avoided. Additionally H.R. 2 increases the fee schedule conversion factor by 0.5% on July 1, 2015 and by another 0.5 percent on July 1, 2016.

Please note the bill made no reference to an ICD-10 delay, thus you should move forward with your preparation for the October 1, 2015 implementation date.

Starting 4/1/15, Palmetto GBA, the Medicare contractor for North Carolina, made the decision to hold claims for service dates on or after 4/1 pending potential legislation from Congress. This was done to minimize any reprocessing of claims that would need to correct claims underpayment in the event of legislation.

What’s going to happen to the claims Medicare was holding?

On April 13, Palmetto GBA posted an update stating they would be begin releasing held claims on April 15. At this time, it is unclear whether Palmetto GBA was able to “fix” their claims processing system to correct the 21% reduction prior to releasing the first round of held claims.

No official response has been published by Palmetto GBA yet. However, they previously stated that if the SGR was repealed they would reprocess claims internally and issue updated payments to providers. See more information here.

MSOC Health will continue to monitor communication from Palmetto GBA closely until a resolution is clear.

Is there anything I need to do?

Not at this time. As explained above, if any Medicare claims are processed with a reduction in error, Palmetto will reprocess internally.

Thank you to everyone for reaching out to legislators to help pass the SGR repeal!